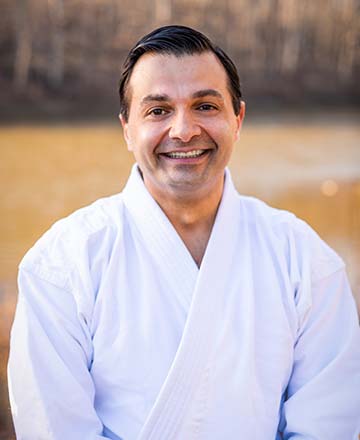 Ricky is the youngest of three children, born in Tehran, Iran on July 26, 1978. His family immigrated to the United States one year later, to escape the Iranian Revolution. Upon their arrival to the U.S., the family settled in the DMV area and remained here to this day.

He began his formal martial arts training at Kim Studio led by Ki Whang Kim at the age of 8. Through his many years of training, he has been exposed to many different forms of martial arts. Karate was his focus, but he has also practiced traditional Tae Kwon Do, Chuan Fa, Aikido, Moo Do Kwan Tang Soo Do, Wrestling, Judo, and Daito Ryu Aikijujutsu. By the age of 23, he obtained four of his six black belts in Karate.  Ricky has won over 150 martial arts tournaments, beginning with his first Grand Championship in the Adult Black Belt Division at the age of 15.

While training six days each week and competing in multiple tournaments, Ricky began attending the University of Maryland and graduated with a Bachelor’s in Elementary Education in 2002. Upon graduating, he joined the corporate world and began working full time. After a few years of working in sales, Ricky left his corporate job to turn his passion for martial arts into a full-time job.

In the Fall of 2018, Ricky joined forces with The Foxhall Foundation and created KenZen-Do Karate and Foxhall Wellness.

Ricky currently resides in Silver Spring, MD, with his wife Shiri and their two dogs and two cats.